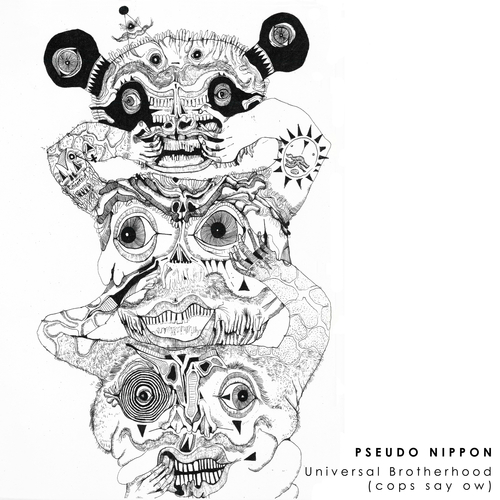 Pseudo Nippon are the combustible three-pronged combination of frontman P-ta and double-drummer outfit Colden Drystone and Dove Kokojin. Together they have melded their chromatic experimental pop into a gleaming whole for second album, 'Colorama', due for release on LP, CD and download on 5th November through Tigertrap Records. The record was named after the empty, then squatted, photographic factory where it was recorded.

Running for two-and-a-half years, the space became the home and hub of a community of anarchists, activists, artists and gardeners, all of whom commonly enjoyed the taste of beef eggs (a PN speciality). Left without a home, they continue their quest to play intense and comic live shows, as well as finding shelter for the night.
First single 'Universal Brotherhood (Cops Say Ow)' is on the schedule for 15th October. The band shot a promotional video in London last month that saw participants end up in a scuffle with police and four being arrested.