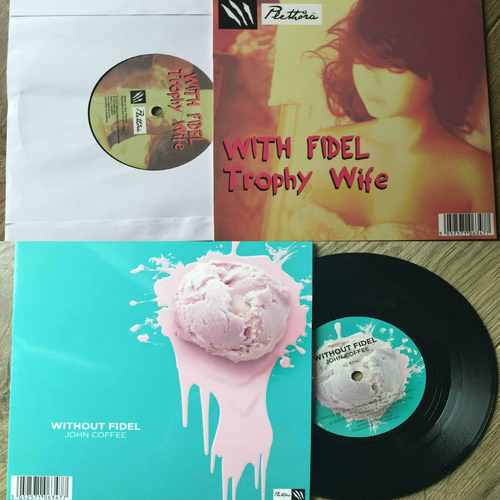 Without Fidel & With Fidel

Without Fidel & With Fidel - Split

London-based Without Fidel and Tokyo-based With Fidel have teamed up for a split single, released by Plethora and Tigertrap Records. Both bands are offshoots of Applicants (Tigertrap/Brainlove Records), an electronic pop punk outfit led by erstwhile Digital Hardcore artist Fidel Villeneuve.

Applicants, formed in 2006, released two albums, played a lot of sweaty, blood-drenched, ecstatically received gigs around the UK and beyond and were variously described as “bona-fide geniuses” (NME), “Riotus” (Artrocker) and “parallel universe popstars” (The Guardian), before splitting up in 2011 when Fidel emigrated to Japan.

Before Fidel even had time to get over his jet lag, the remaining London-based Applicants had formed Without Fidel - with Paul Blades on guitar and vocals, Jeffrey James on synth, bass and vocals and Adam Boult on drums. The trio's first post-Applicants release John Coffee is a deft three minute slice of indie pop punk, charting one man's harrowing experience of thwarted caffeine consumption and recalcitrant customer services.

The accompanying video for John Coffee, directed by regular Applicants collaborator Mike Prior, was filmed in one take in a darkened cellar on a hot afternoon, and required the band to learn to play and sing the song backwards.

With Fidel is one of several musical projects led by Fidel Villeneuve following his relocation to Japan - with Nana Oshima on bass and Abe Sakai on drums. The trio played a series of chaotic but well-received gigs around Tokyo in 2014, and managed to lay down some tracks at Gok Sound studio in Kichijoji, before Abe wandered off one evening to watch Veronica Falls and was never seen again.

Trophy Wife, a heartfelt anthem to finding a soulmate in a world without soul, showcases Fidel's ear for a comic couplet, and a rare lyrical talent that has drawn comparisons to Nigel Blackwell, Spike Milligan, and John Cooper Clarke. The accompanying video was shot and edited by Fidel himself on the streets of Tokyo, much to the bemusement of local residents.

Unfortunately at this time we can't offer all the Without Fidel & With Fidel - Split tracks as individual mp3s, as some of these tracks exceed the shops maximum (18mins) download length.

These longer mp3 tracks are available in the full album download.

Unfortunately at this time we can't offer all the Without Fidel & With Fidel - Split tracks as individual mp3s, as some of these tracks exceed the shops maximum (18mins) download length.

These longer mp3 tracks are available in the full album download.